This is the third post in a series on the History of Sheet Music. You can read about the history of sheet music and early notational systems in two previous posts. This post looks at the evolution of western music notation.

The image above is an example of plainchant, also called plain song. It is a type of medieval church singing without any instrumental accompaniment. Plainchant notation dates from the 9th century on, and is widely recognized as the very first type of notation on which today’s western notational systems are based on.

Plainchant used “neume” signs, which are the foundation for today’s notational systems.

The Encyclopedia Britannica defines neume as

…a sign for one or a group of successive musical pitches, predecessor of modern musical notes. Neumes have been used in Christian (e.g., Gregorian, Byzantine) liturgical chant as well as in the earliest medieval polyphony (music in several voices, or parts) and some secular monophony (music consisting of a single melodic line).

Neumes purposely did not represent exact pitches or rhythms, but rather were used as way to remember songs that had already been learned. Neumatic notation was open to a wide variety of interpretations.

Plainchant is also an example of monophony, usually described as a single melodic line without harmonizing accompaniment.

The addition of instrumental accompaniment to plainchant resulted in a more complex notation system.

By the 13th century, square notation was in use. The image below illustrates a piece from the Graduale Aboense (14th-15th century): 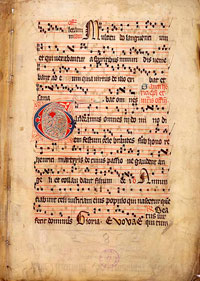 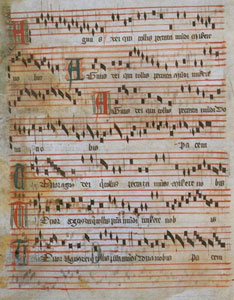 Notation continued to evolve, eventually including time signatures and tempo indications after the 17th century. Metronome indications were used by Beethoven in the early 19th century, and in the 20th century Bartók was specifying the duration of his compositions in minutes and seconds.

3)    All images in the Public Domain